Workshop Weekend in Phayao Prepares Students for the Courtroom 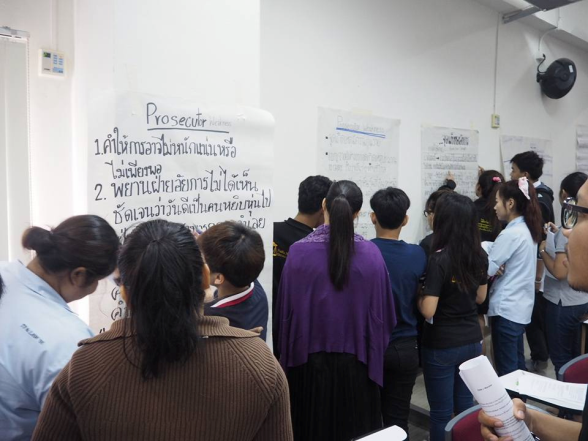 The first session opened with an unexpected lesson. That is, in order to teach the idea of thinking on the spot, with confidence and creativity, Bruce introduced an activity, where the participants walk across the floor, in a “silly walk”, then change halfway, to a new “silly walk.” This served to set the mood, and to stress the important need for confident spontaneity. It also served to break the ice with the students, and to engage them in the workshop. 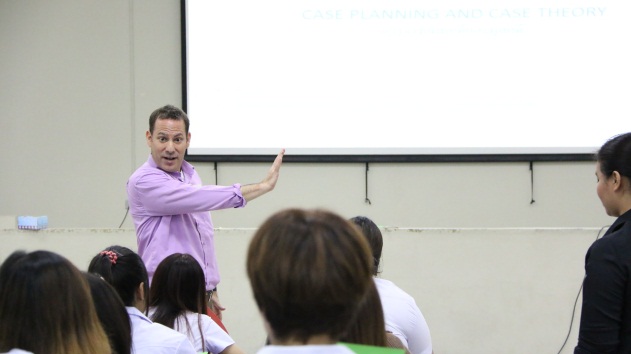 On the weekend of September 25th, the BABSEACLE Chiang Mai team, accompanied by international trainers Bebs Chorak and Tim Dickey, visited the University of Phayao, to put on a workshop that was aimed at setting up a mock trial. Bruce Lasky, Co-Director and Co-Founder of BABSEACLE and the University of Phayao visiting law lecturer, led the workshop. The weekend had three main aims for the BABSEACLE team: to introduce the idea of and run a mock trial; to give students a chance to role play and practice real courtroom situations; and to simultaneously teach lessons about how to be engaged in an ethical and fair law profession. Bruce emphasised that the purpose of the weekend was not to win the mock trial, since “everybody wins because everybody learns.”

The second session began with the simple questions, “What is a mock trial?” and, “Does it have to be the same as a real trial?” These questions started a brainstorming session, as all the students were encouraged to put forward their ideas of what a mock trial should be, and of how it relates to a real trial. After some discussion, the students came up with the conclusion that, sometimes, a real trial isn’t fair- e.g., if some people are not being able to afford representation, or if some judges are not paying attention. The mock trial, however, is used to learn about fairness and how to improve lawyering skills. Hence, while the mock trial isn’t an exact representation of what the justice system is, it is a good simulation of what it could/should be. 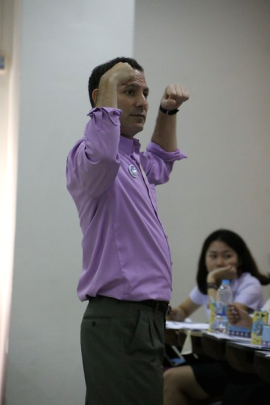 With that, the first day proceeded to cover the theory of trial. Bruce explained the concepts of “case theory” and “case planning”, to the participants, and went over various strengths and weaknesses of evidence. The whole process was interactive and beneficial, for the students, as lessons went beyond rote learning, and into the realm of legal practice. Tim Dickey, a lawyer of 50 years, and Phyoe Win, a visiting law lecturer from Myanmar, led a lesson on the concepts of critical case facts and how to approach them, not only for the prosecution, but also for the defense.

While the first day focused heavily upon theory, the second day transferred work to students, as they divided into groups that created posters, which depicted opposing evidentiary strengths and weaknesses of the defense and prosecution. Then, the students had a “gallery” style session, where they critiqued each other- i.e., they viewed each other’s work, noted any agreement/ disagreement… and why. Each group was then given a chance to present their poster, defend their arguments, andhear other groups’ opposition. They smiled, laughed, and held healthy debates about case facts. It was an informative and educational experience, because students saw how the same facts could, depending on the argument, be a strength or a weakness, and lead to different conclusions. The main session, in the afternoon, opened with the long- awaited mock trial. Students joined opposing groups and held two separate court trials. While it had a bumpy start (both trials had to restart at least once), the end product was a resounding success. All “lawyers” questioned “witnesses”, with confidence, and the proceedings tested everyone’s understanding of courtroom practice. They learned how to argue convincingly and how to deal with trial law. Post-trial, judges assessed lawyers on argument skills, and visiting Myanmar law lecturers evaluated the entire session.

The two days ended with a debriefing session that focused on drawing conclusions from the entire workshop experience- e.g., questions and answers regarding roles, challenges, and learned values.  This was conducted by a group of Myanmar Law Teachers currently based with BABSEACLE in Chiang Mai. The Myanmar teachers, along with the BABSEACLE team and international volunteers, motivated participants to see and appreciate the importance of a fair and impartial court system. Finally, everyone involved had fun, learned a lot, and left with an appreciation of e the adversarial phenomenon. When faced with the question of social justice, one student stood up and said, “Social justice should be everywhere, should be accessible and should be safe.” On that note, the workshop ended with everyone having something to retain for personal reference or share with non-attendees.

By Mark Smith, intern for BABSEACLE