National University of Laos Hosts Workshop on the Essentials of Contract 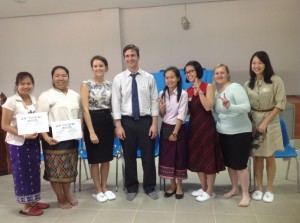 on 13–14 March 2014.  The workshop was presented by lawyers from international law firm, White & Case, and consisted of a talk on contract structure and group workshops where the participants had the opportunity to discuss key points of contract drafting. Attendees included law lecturers from the FLP, intern lawyers from local firms,  NGO members and students from the National University of Laos cooporated with the Laos Bar Association in organizing the workshop,  Which was co-supported  by the Lux-Development, White and Case and BABSEACLE. 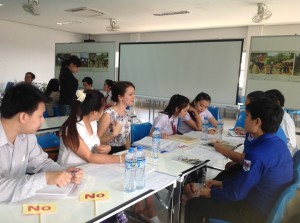 On the second day, the audience was divided into small groups, each led by a member of the White & Case team.  The participants  were invited to consider the possible issues that may arise during the negotiation process. As a basis for discussion, the  workshop used examples from a joint venture agreement and a supply agreement. The groups considered and presented their views on a variety of  topics including control and management issues, risk assessment and dispute resolution.   The workshop participants were pro-active and provided many interesting points  for discussion,  resulting in sessions which were informative and interesting for both  the audience and the presenters. The FLP, BABSEACLE and White & Case hope to run similar events in the coming years.