Bridges Across Borders South East Asia Community Legal Education Initiative (BABSEACLE) and DLA Piper/New Perimeter, with the support of the United Nations Development Programme (UNDP) as well as supporting partners Herbert Smith Freehills and Open Society Foundations, have just begun a project to provide further support to strengthen the development of CLE programmes with a minimum of 12 of the 18 Myanmar university law departments nationwide.  For over two years, BABSEACLE has been working, tirelessly, to bring clinical legal education into Myanmar, as a means to strengthen the rule of law, legal education and the pro bono spirit. Building on an incredibly successful 2013 CLE pilot project implemented by BABSEACLE, DLA Piper/New Perimeter, the Open Society Foundations, Herbert Smith Freehills and others, the UNDP recently approved an additional two year project. This initiative will bring Myanmar further into the folds of the CLE network, and more connected to the BABSEACLE family. 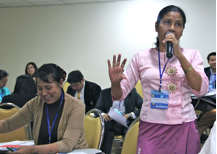 Technical support to Myanmar’s university law departments will include the organization of further training workshops, provision of relevant CLE materials, assistance with curriculum development, opportunities to participate in study tours and to attend national and regional CLE workshops and conferences. It also will include having regional and international university clinicians placed with some of the university partners and a select group of Myanmar CLE related law lecturers placed abroad.  When necessary, small, “seed money” micro-grants will be provided to those universities in need of this support to help launch and initially build their programmes.

Simultaneously, BABSEACLE, DLA Piper/New Perimeter and Herbert Smith Freehills will work with all the university partners with the aim of their creating accredited and sustainable CLE programmes, throughout Myanmar.

Through this two year project, BABSEACLE, DLA Piper/New Perimeter, Herbert Smith Freehills and the UNDP aim to assist in facilitating the spread and growth of CLE throughout Myanmar. Following on the success of the pilot CLE project, we are confident in the prospects and possibilities for CLE in Myanmar. With the support and collaboration of BABSEACLE, DLA Piper/New Perimeter, Herbert Smith Freehills, the UNDP, the Myanmar Ministry of Education, policy makers, heads of departments and law professors and lecturers, CLE will be incorporated into the legal education system and begin creating a future generation of better qualified law graduates that are instilled with a pro bono, access to justice, ethic.