Such an Experience! Two Weeks at The Asia Youth Forum in Kyrgyzstan This year I was lucky to be able to attend the 2013 IDEA Asia Youth Forum in Kyrgyzstan. It was a two-week experience of debating and judging with 150 participants from more than 12 countries in the world. This was a good educational chance to learn about debate, coach and judge teams, as well as to live and spend time with people from other cultures. The forum was such a big success in creating a place for people to join in and learn from each other. 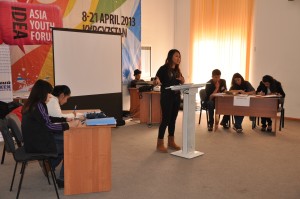 Through attending this event, I understand more about how to conduct and organize a debate tournament. I learned every aspect of organization including choosing the debate motion, forming the team, the template for tabulation, and how to  judge a team. At the beginning of the forum, we were introduced to the forum, the Karl Popper format, and then the debate tournament. Debate teams from different countries were divided to compete with each other to find the champion. Not only did the debaters actively get involved in the tournament, the great thing about this forum was that it was an educational chance for all. Everyone played a role in it as either a coach who worked closely with the team to help them prepare, or a judge who had to step back and be objective with the teams. Being a judge for me was interesting and challenging at the same time. Being placed in those shoes, I needed to think and do as best as I could because I knew my feedback and decision would affect the results of the games and what the debaters might think or feel. In parallel with practicing being a judge, both debaters and judges received more training in their lab rooms so that we all could improve and prepare for the mix-team tournament. There I learned more focused topics such as motion analysis, voices and postures. As well as about debates, from debate tournament to debate organization and fund-raising. I interacted with trainers and shared experiences with other participants. 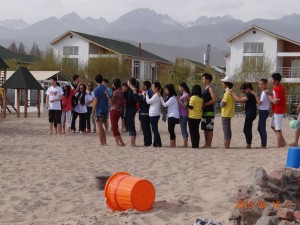 Another great part of the forum (less studying) was a range of well-organized social activities. After a full day of learning, we all had a chance to relax and have fun. There was a fashion show, talent night, country expo, game party, and dancing. Country expo was such a great event for someone to learn about many other cultures at the same time. All the things that I had read through books, heard, or seen through film about a particular country/place were now being displayed with traditional customs, foods, pictures and dances. The atmosphere felt so alive and I felt overwhelmed with happiness because I could feel a bond between us, between cultures, between nations in such a peaceful and friendly way.

All of the things that I have learned during the forum are valuable. It is very-well connected with the CLE program that we are doing to support future lawyers. Debate and advocacy are obviously the skills necessary for law students and lawyers in the course of their profession. We are planning to integrate debate into CLE programs in training law students. By doing this, it will not only be helpful to the students and people in legal profession but will also make a great impact on the community. 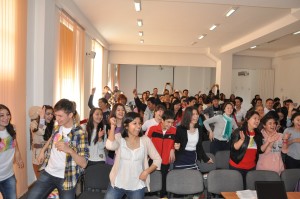