Remembering Azriel, an Unexpected Gift to So Many

Our relationship with Azriel Cohen began completely unexpectedly last April. It ended, even more unexpectedly, in October. In the six months in between, Azriel was a member of our BABSEACLE family. In April, Arnold asked to bring a guest to a Jewish Passover Celebration Dinner. That guest, Azriel, ended up leading the service, attended by Jewish and non-Jewish people from all over the world.  He had a beautiful, inclusive way of telling the tale of how a people in bondage found freedom and justice. Obviously a gifted teacher, he connected this 3,000-year-old story to contemporary issues and peoples of many different religions, cultures and nationalities.

That night will always stay transfixed in my memory as significant and moving. It will stay there as significant and as moving as another night, this past October, when I received a simple and chilling email notice that Azriel had passed away in the USA. Azriel had just left Southeast Asia to visit his family. He arrived, met many relatives eagerly waiting for him and it was joyous. He laid down that evening and never woke up.  At age 47 his physical body had left this world.

The exact reasons are still unknown. Possibly an unknown heart condition or a blood clot, but this is not important. What is important is remembering what Azriel brought to us and ensuring that, while his physical body has left us, his work, passion, and dedication to striving for social justice lives on. 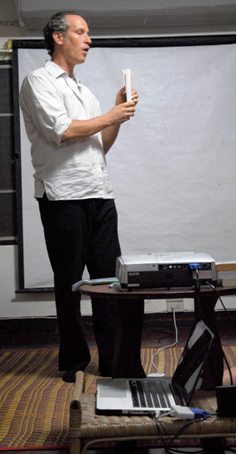 Magical, caring, artistic, insightful and always full of positive energy, are just a few of the many ways to describe Azriel.  He was a real connector of people who wanted to make a difference, to make this world a better place.

Azriel’s personal history and journey was an amazing one. He defined the term “renaissance”. When talking to him about his past, it was as if you were conversing with a dozen people, each with a treasure chest of life-long experiences.

He continuously built on those past experiences in order to find a more positive path for himself and those around him. Having initially grown up in Canada, early in his adult life he spent much time in Israel and Palestine, focusing on working with people from both lands who had suffered trauma. He became known as a healer and these encounters motivated him to assist individuals in other parts of the world, to explore ways to heal and grow.

As many of you know, our organization had been working with Azriel on a “Reading the Body” project, which focuses on training future lawyers how to effectively and compassionately work with clients in trauma by sensing their body energy.

From June-October this year, Azriel collaborated with our core team, interns and volunteers from around the globe, to develop interactive training curriculum that integrated this body-sensing method. The guidance and mentorship he provided to us can never be fully calculated and we are so grateful.

“Azriel taught the polyvagal theory, which claims there are three basic states or moods of humans: a social engagement state, where the person is talking normally, laughing, or relaxing, reading a book; a flight or fight state, where the person either wants to run away from their current situation or fight their way out of it; and a freeze state, where the person is so disturbed that they cannot move and are in shock. As a neuroscience theory, it is more complex and varied than explained here, but Azriel did well to simplify it in order to help the people at BABSEA CLE, and ultimately law students and CLE trainers, work with people more effectively.”  — Sukrat Baber, BABSEACLE  Intern 2012, J.D. Candidate, 2014; Indiana University Robert H. McKinney School of Law and President, International Law Society At a memorial service for Azriel in Chiang Mai, we were approached individually by a diverse group of local people who knew Azriel.  Each one of them told us how excited Azriel was to be working with BABSEACLE. They told us how he felt the work we were doing gave him a new sense of energy and direction. They expressed gratitude to us that was very unexpected but also very much appreciated.  We explained to them that it is our intention to continue interjecting Azriel’s work into the training materials we have been developing and ensuring that in this way he continues to live on.

We are sure that we speak for all who knew him in the BABSEACLE community, in saying that we have really been blessed by having Azriel in our lives and we will miss him very much.

As Azriel would often sign off his communications to us, we would like to say to all of you, “Shalom“.