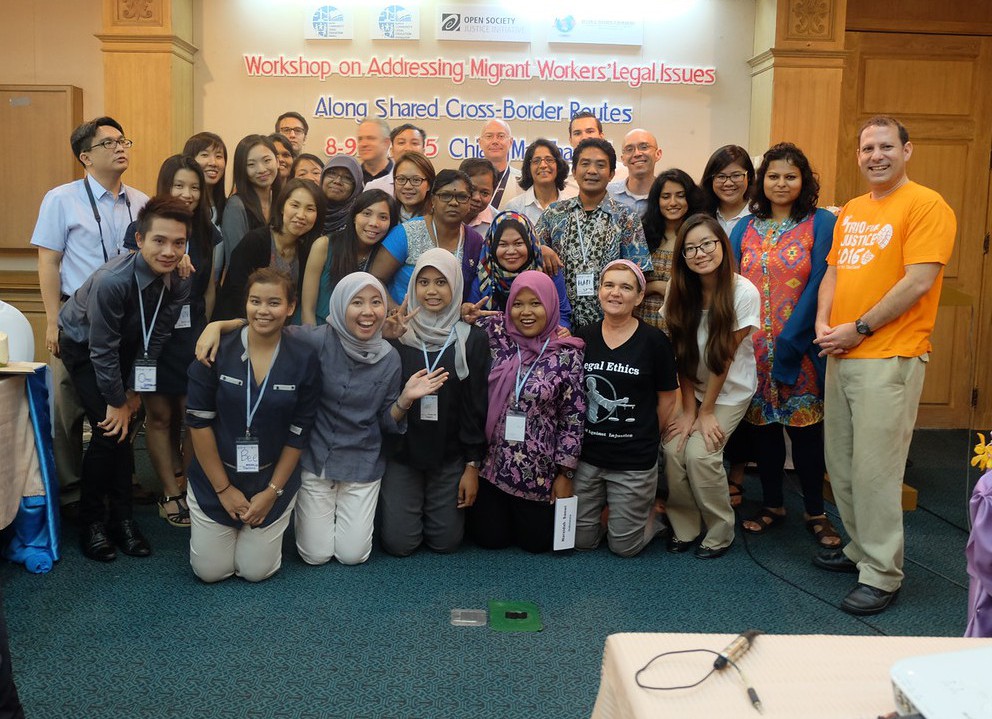 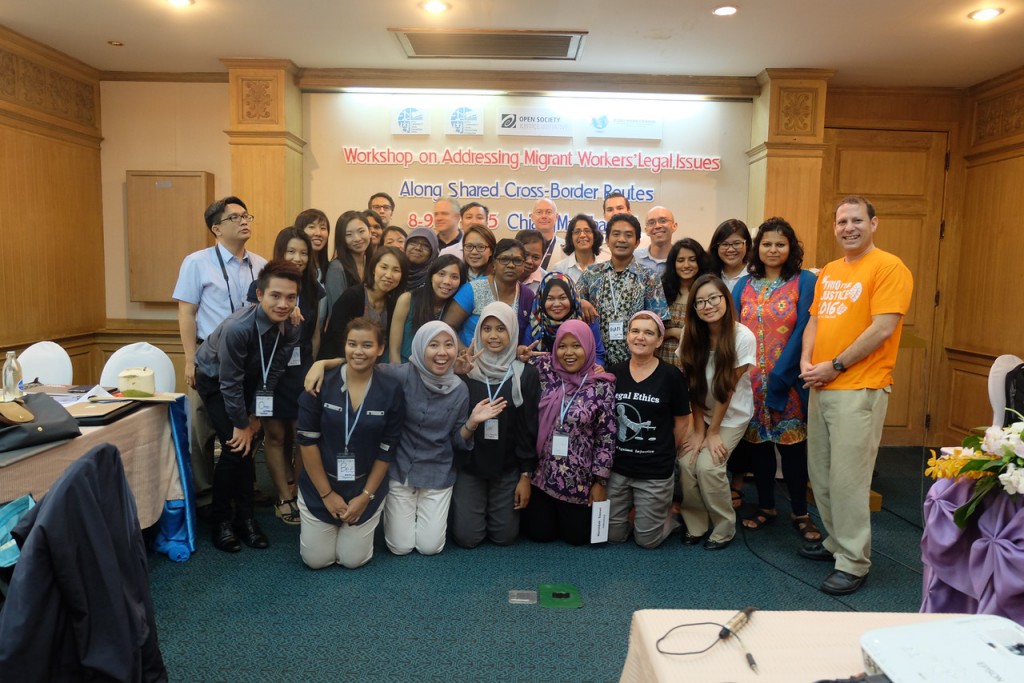 At the beginning of May in 2015,Bridges Across Borders South East Asia Community Legal Education Initiative (BABSEACLE)and Justice Without Borders (JWB) convened a workshop on addressing cross-border migrant workers’ legal issues. Funded by the Open Society Foundation’s Justice Initiative (OSJI) and TIFA,  the event brought together experts and practitioners from Hong Kong, Indonesia, the Philippines, and Singapore in addition to the local and international BABSEACLE and JWB team members.

The goal: to identify common issues of exploitation that workers encounter in their home and host countries, and how practitioners, in those jurisdictions, could work together to solve cross-border problems, along several regional migration routes. Despite the incredibly busy migration routes that connect these places, lawyers, law faculties and non-government organisations (NGOs) are just now beginning to reach out to counterparts in other countries, who all serve the same client populations. Amazingly, this was the first such gathering of these jurisdictions.

As hoped and expected, the response to the workshop was phenomenally productive. Over 30 participants attended, from all sectors of client services. As a law student at the National University of Singapore (NUS) who volunteers with JWB and local NGOs, I was particularly happy to see that law students were included as active participants.

In fact, the workshop focused strongly on participation. Rather than simply discussing and identifying common issues faced by migrant workers along these migration routes, participants aimed to develop a work plan for a strategic guide on remedies to the most common issues that migrant workers face. The hope is that advocates in both home and host countries will be able to use this guide to further their own work, whether it is by providing direct legal service, by guiding law students in pro bono services via clinical legal education, or by NGOs developing “know-your-rights” materials for their clients. 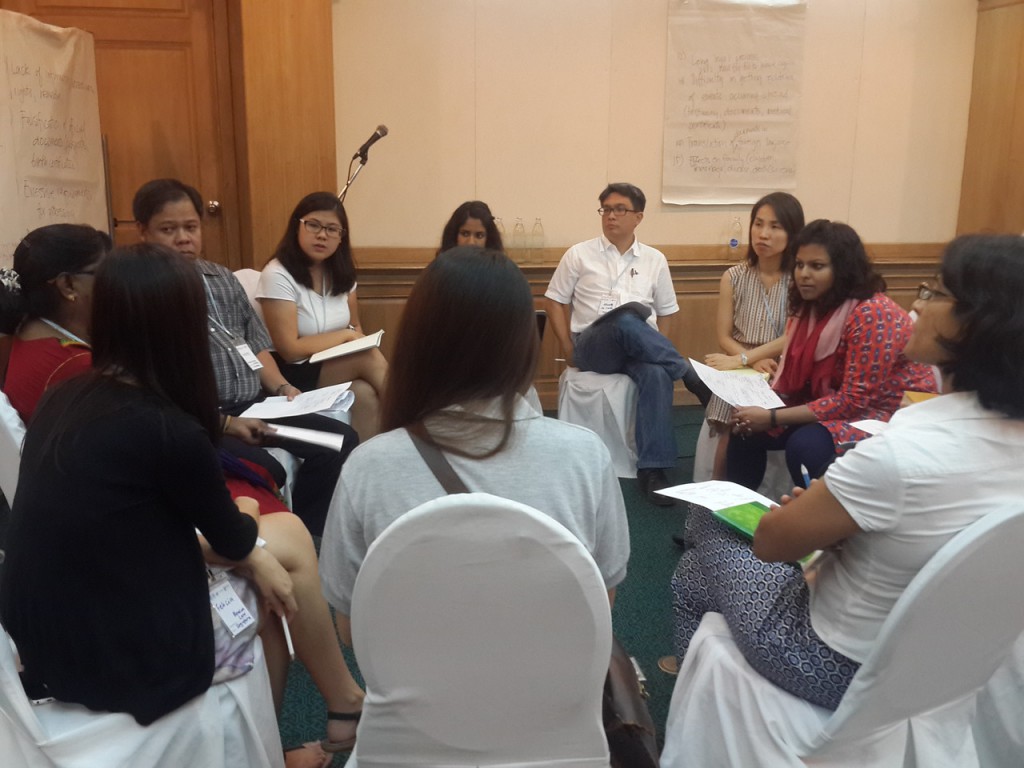 The bilateral discussions that took place were excellent opportunities for these experts to focus on specific migration route issues. The legal infrastructure, in each jurisdiction, is at a different stage of development, in terms of protecting migrant worker rights, and this was apparent from the varying discussion focuses. For some jurisdictions, such as Hong Kong and the Philippines, which have more developed systems, the focus was on improving access to existing channels and on increasing awareness of workers rights. Meanwhile, those countries, with lesser institutional support, focused on using existing legal remedies, in innovative ways, in order to bridge existing legislative gaps.

From these discussions, emerged a list of key issues, in the work product, that each jurisdictional migration route wished to address. While the exact content of the strategic guide will be shaped by the most common issues that workers encounter, generic issues regarding the exploitative practices of employment agencies, debt bondage, salary underpayment, and abusive employer treatment were thoroughly discussed.

Going beyond such content the relationships that formed, during our two days in Chiang Mai, were an incredibly important outcome of the event. Having legal and NGO experts, from different jurisdictional backgrounds, led to thought-provoking discussions that resulted in a wide variety of potential legal and non-legal solutions for worker exploitation.

One exciting example of such solutions was that raised by Singapore’s The Humanitarian Organization for Migration Economics (H.O.M.E), and Indonesia’s Serikat Buruh Migran Indonesia (SBMI, English: Indonesian Migrant Worker Union), It was the potential of using the mandatory insurance policy, in Indonesia, to make claims of reimbursement for work accidents, non-payment of salary, and even legal fees. While the system technically allows for such claims, from migrant worker while abroad, no such claims have yet been made. Hopefully, claim implementation will be pursued by the experts who attended the workshop.

By the close of the event, the participants had taken a collective step towards building a regional community of practice that could begin to meet the cross-border needs of migrant workers. As a Legal Fellow for JWB, I am excited to help coordinate the experts’ work on building a body of knowledge that is currently scattered across four jurisdictions. The remedies-focused discussions, at this workshop, also hinted at issues of capacity and policy reforms that I hope will be explored in future gatherings.

This event really showed the power of collaboration, and I am very thankful that I could be a part of the ground-breaking work that is beginning to take place. Thank you, to BABSEACLE, JWB, OSJI, TIFA and all the participants who made the workshop a success. On behalf of JWB, I look forward to facilitating the original work and to growing the partnerships that began at this event.

By Charmaine Yap_student from NUS (National University of Singapore)