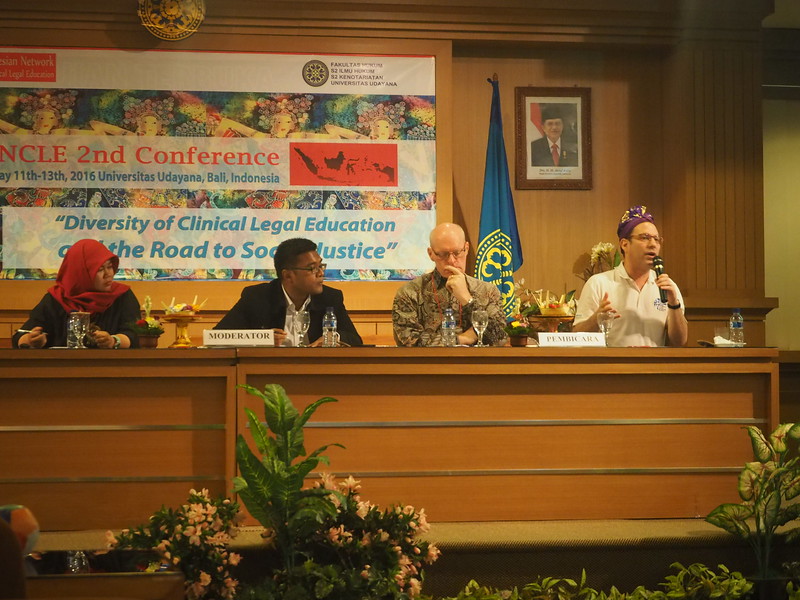 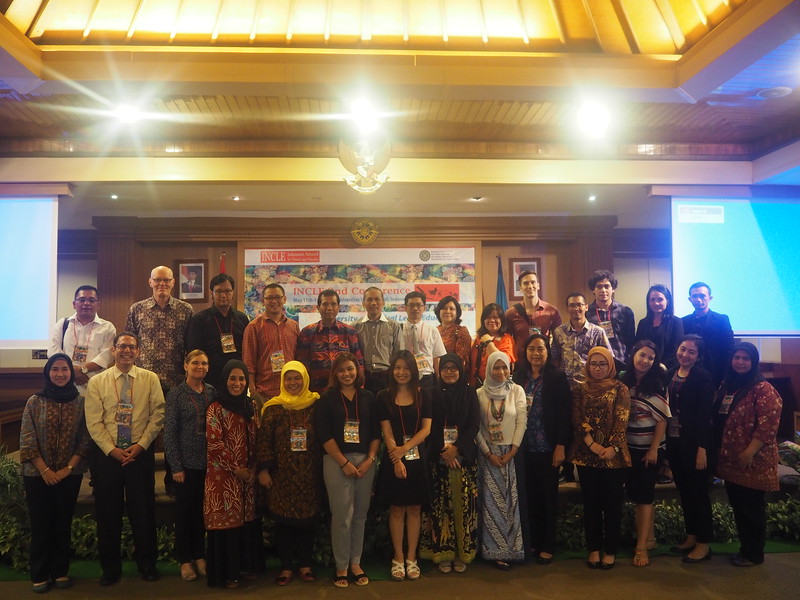 The INCLE 2nd Conference on Clinical Legal Education was held, between the 11th and the 13th of May, 2016, at the Post Graduate Building of the Faculty of Law, Universitas Udayana, Denpasar, Bali, Indonesia, and the main topic was “Diversity of Clinical Legal Education and the Road to Social Justice”. The event was opened by the Rector of Universitas Udayana, Prof. Dr. Ketut Suastika, who highlighted the values of clinical legal education (CLE), and said that CLE is an important instrument that should be fully internalized, in law school curricula, as it provides a learning process, from both the theoretical and practical aspect. He also stressed that its most important feature is promoting the values of social justice. 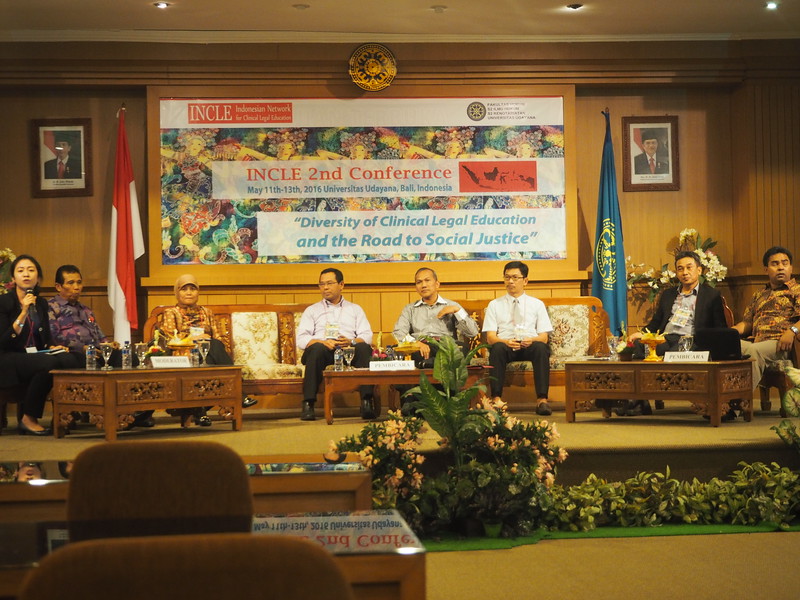 Then, the Secretary General of INCLE, Dr. Inge Lidwina Nurtjahyo, explained that the purpose of this conference was to share diverse knowledge, skills and values and to develop CLE for the achievement of social justice. Dr. Lidwina hoped that the conference could be held continuously, in the upcoming years, in order to further develop Indonesian clinical legal education, and to strengthen the cooperation between academicians, Civil Society Organizations (CSOs), and governmental agencies, in the pursuit of a qualified legal education, for all. Finally, the Dean of Udayana Faculty of Law encouraged other law faculties to become members of INCLE.

After the opening ceremony, this conference, which was attended by 250 people, continued with a plenary session on the development of past legal clinics, in some Indonesian law faculties. The speakers were representatives of Indonesian universities, the Corruption Eradication Commission (KPK) and the Judicial Commission (KY). This plenary session, which ended up in an interactive talk show, specifically focused on the experiences of law faculty leaders, in the development and potential of legal clinics, the challenges faced and the improvement of the law, in Indonesia.

The rest of the day was composed of break-out sessions. The overall theme of the Conference was  “The Role of Legal Clinic in Promoting a Legal System Based on Social Justice in Indonesia”. The first day ended with a welcoming dinner, at the official residence of the Governor of Bali Provence.   All participants were welcomed by the Vice Governor, Dr. I Ketut Sudikerta, who explained that the members of the government of Bali support the movement of clinical legal education, as one of the ways to improve the legal system, in Indonesia, that they encourage the cooperation between various academic institutions and that they endorse the role of law students, in Bali.

The second day of the conference was opened with a plenary session, run by some international speakers from several countries. The speakers were Oce Madril, S.H., M.A (INCLE), Leni Widi Mulyadi, S.H., M.H. (Faculty of Law, Universitas Pasundan), Mr. Bruce Lasky (Bridges Across Borders South East Asia Community Legal Education Initiative), and Prof. Les McCrimmon from Charles Darwin University. They shared experiences and knowledge related to the development of clinical legal education in their countries. In general, clinical legal education does not only teach law students about knowledge, but also practical skills, and, most importantly, values. The main purpose of CLE is that law graduates are not only clever in knowledge and skilled, but to also have integrity and uphold ethics as the most important aspects. Essentially, clinical legal education, which can be manifested in various forms, consists in helping law students in the implementation of the law according to the context of each society.

Another important thing to be mentioned is that in this second INCLE conference, some of the speakers were ex alumni of legal clinics who are now working in public sectors. They stressed the importance of clinical legal education when performing their roles and duties as CSO activists, as well as lecturers. 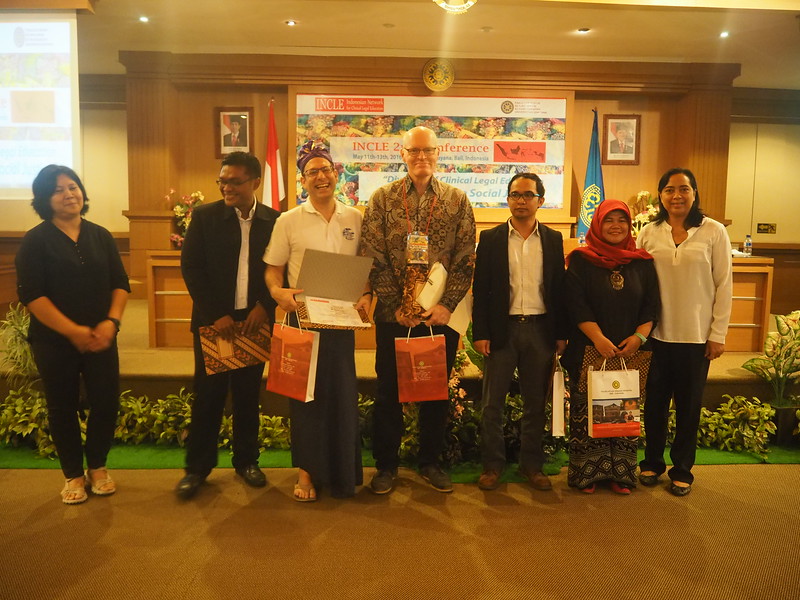 On the third day, a ‘Training on Trainers (TOT)’ session was held and attended by 30 participants, a mix of lecturers and CSO representatives. The theme was “Building a Model of Interactive Teaching Method for Clinical Legal Education”. The aim of this training was to demonstrate to the participants how to teach their students with more interactive and ‘vibrant’ teaching methods than a one-way monotone lecture course. At the end of the TOT session, the trainers held a reflective session, where the participants and trainers shared their thoughts, ideas, and suggestions on what they have learned during the whole activity, and how to improve the next conference and TOT.

The participants also conveyed their hope to have the opportunity to participate again and to invite more of their colleagues to the third conference in the upcoming year.