From Conflicts to Peace: Human Rights and Transitional Justice Workshop

The field of human rights in a region as large as Asia is an ambitious topic to cover in a one-day workshop. With the support of numerous partners including Asia Justice and Rights (AJAR), Bridges Across Borders Southeast Asia Community Legal Education Initiative (BABSEACLE) and the United Nations Office of the High Commission on Human Rights (UNOHCHR) held such a workshop in Bali, Indonesia on August 29, 2016. AJAR and the organizers focused on specific areas of human rights in Asia and leveraged the experience and expertise of highly respected presenters. With this exciting and engaging session BABSEACLE, AJAR, UNOHCHR and other partners kicked off the 2016 Asia Pro Bono Exchange. 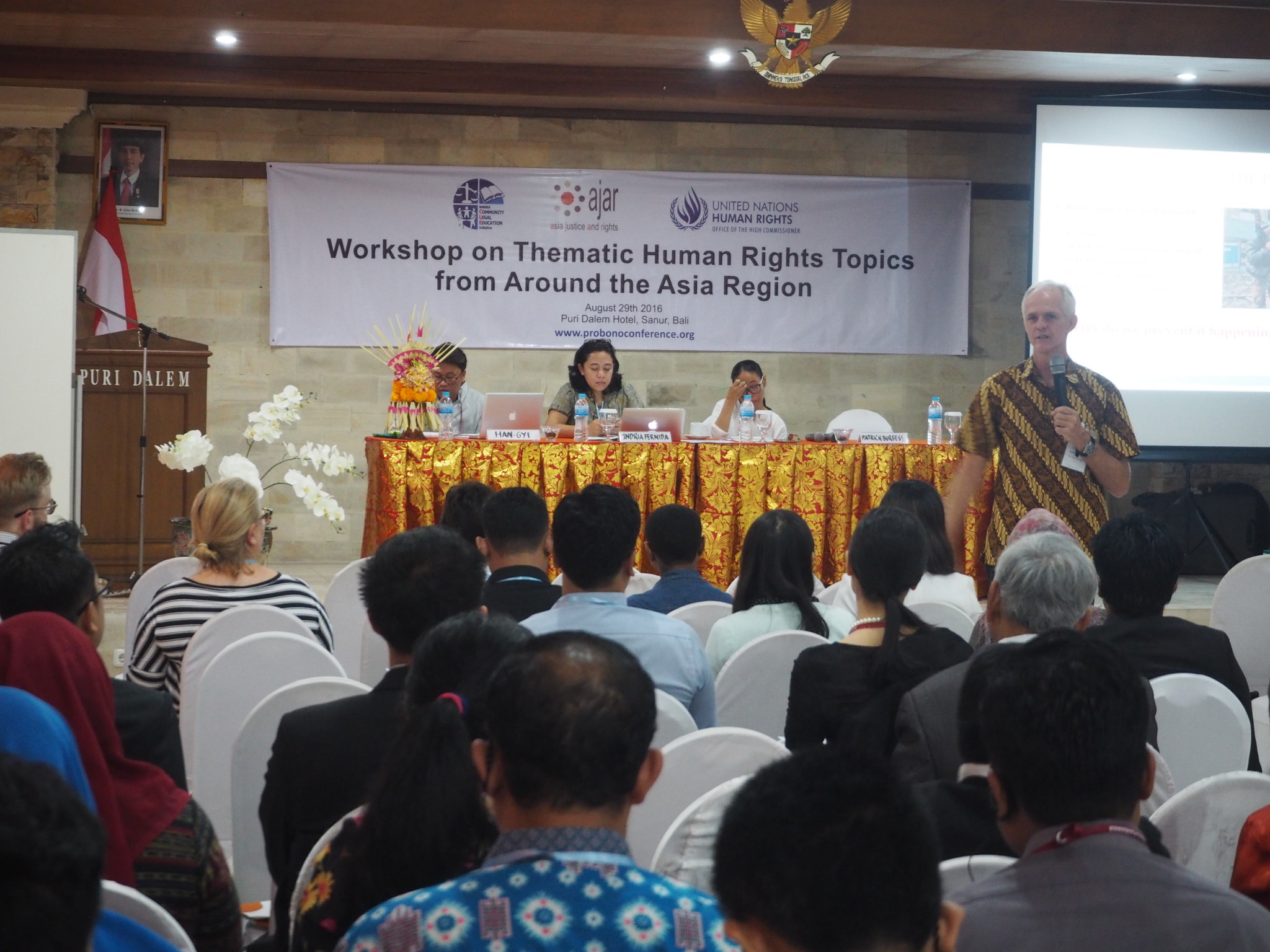 The Workshop began with AJAR Founder Patrick Burgess sharing lessons on transitional justice. For Patrick, transitional justice answers the question “what do we do?” after a violent conflict. Some might say the best thing is to do nothing; just move on and deny the past. But this is not true transitional justice. Effective and genuine transitional justice uses tactics such as prosecutions, truth and reconciliation tribunals, policy reform and reparations to rectify the past while allowing an affected community to move towards a brighter future. Each of these tactics has its advantages and disadvantages. For instance, prosecutions may be highly desirable to hold perpetrators of humanitarian crimes accountable. However, they are often politically difficult to pursue in national courts and particularly in international courts.

The next session tackled the issue of gender and human rights. Sarala Emmanuel from Sri Lanka discussed her experiences and challenges faced in investigating, documenting and challenging sexual violence. In Sri Lanka, Sarala Emmanuel encountered “structural sexual violence”: a culture of extreme discrimination and antagonism towards women that continues with impunity. Galuh Wandita of AJAR added to the discussion by emphasizing that conflict will always take on special gendered implications for women. She offered the case study of Angela from Timor-Leste who survived assault and rape during the conflict with Indonesia. Angela’s case was the only instance of a successful conviction of rape as a crime against humanity in the post-World War II era. Despite this legal victory, Angela continues to live in poverty and struggles in her day-to-day life. This case served as a reminder to all participants that our duty to clients as pro bono advocates goes beyond formal legal procedures; we must do what we can to provide survivors with the services they need to live meaningful lives.

Participants at the workshop were next treated to a high-level discussion from United Nations representatives Heisoo Shin, Liza Sekaggya, Nahla Haidar, and Tae-Ung Baik. These panelists shared the role various UN bodies play in shaping the human rights system at the global level and how this affects human rights realization at the local level. In order for international human rights mechanisms to have any impact, there must be strong partnership between national human rights institutions, law enforcement, civil society, grass roots organizations and many other sectors. 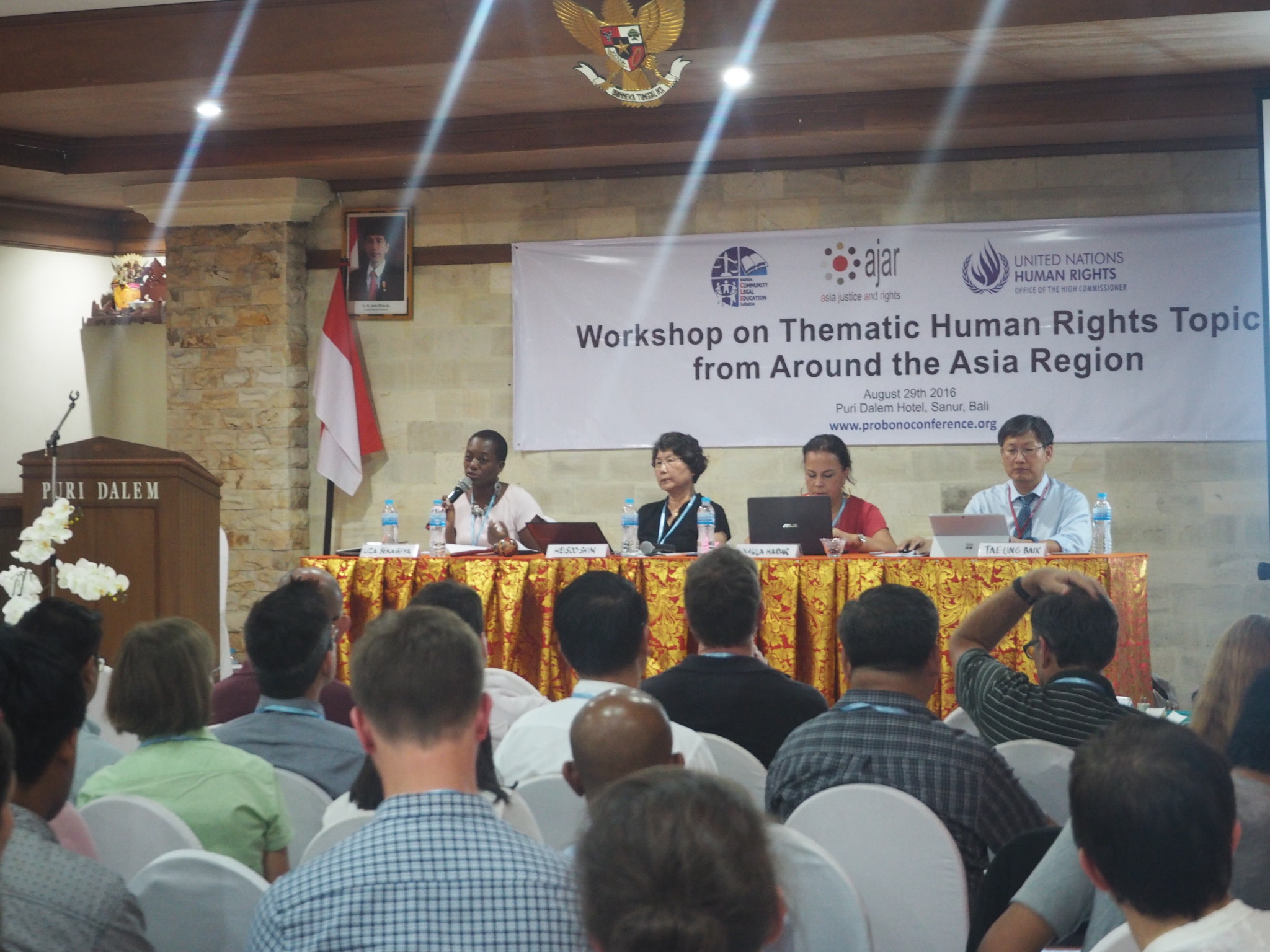 The workshop closed with a session on the ‘Stolen Children’ of Timor-Leste. During the conflict between Timor-Leste and Indonesia which began in the mid-1970s, thousands of Timorese children were taken from their families by the Indonesian military and sent back to various parts of Indonesia. This was a tremendously traumatic experience for the children and their families. The conflict between the two countries raged for decades and most of the children have never been able to return to see their biological families. AJAR began a program to help reconnect the Stolen Children of Timor, now adults, with their parents, siblings and other relatives. The participants also had the chance to watch a short film documenting the first visit of the stolen children back to Timor. It was a tremendously moving experience, not just for the native Timorese captured on film, but for all the workshop participants watching their story.