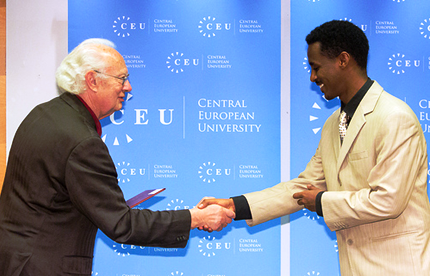 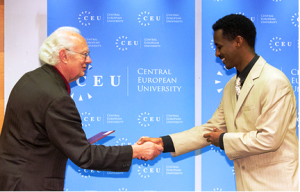 The BABSEACLE Award was presented for the first time this year to Ephrem Birhanu, who completed the CEU LLM in Human Rights with distinction in June. Birhanu is from Woldia, Ethiopia and holds an LLB from Addis Ababa University, where he graduated from the Faculty of Law with Great Distinction. He has been involved in many human rights causes and projects, including as a volunteer legal counselor with the Organization for Social Justice in Ethiopia and the Children Legal Protection Center of the African Child Policy Forum. He has also contributed to peace-building strategies in his home country by participating in the Ethiopian Peace and Development Committee.

In his thank you letter to Bruce and BABSEACLE, Birhanu said the award meant not only recognition to him for his efforts, but also as inspiration to continue to pursue his passion as a human rights activist. “I plan to start the process of establishing a local Human Rights and Community Development Association,” he wrote, “to work for the realization of human rights and improve the living standard of people in Ethiopia.”