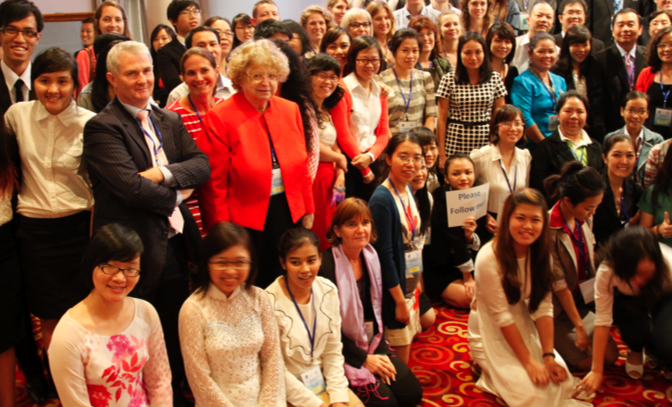 Like the first conference held in 2012 in Vientiane, Laos, the Second South East Asia/Asia Pro Bono Conference and Workshop held from 11-12 October 2013, on the banks of the Saigon River in Ho Chi Minh City, Vietnam, was infused with an unbridled enthusiasm for justice and “pro bono lawyering”. With well over 200 delegates and a significant number of law students also attending, this enthusiasm was infectious and provided the right environment for fruitful discussions, networking and exchanges of information that furthered the development of pro bono legal culture in many countries in the region. Coinciding with the two-day state funeral of the legendary Vietnamese military commander, General Giap, the conference opened with a tribute and a memorial silence which reminded us all of the history of a country that had struggled long for its independence and the ongoing plight of the poor and disadvantaged in Vietnam but also in many countries of the region. Delegates from 17 countries attended and in the fun spirit of a BABSEACLE- style of conference, each delegate drew a picture of their country’s flag and then “Hello” was said in 17 different languages and ways. Instantaneous translation between English, Vietnamese and the Myanmar language was provided throughout the conference. The theme of the conference was strengthening the role of pro bono in improving access to justice in the region. Antje Kraft, justice and human rights specialist from the United Nations Development Programme (UNDP), provided an overview of social need in the area and a definition of access to justice used by the UNDP, being “the ability of people to seek and obtain a remedy through formal or informal institutions of justice, and in conformity with human rights standards”.

Examples of pro bono projects throughout the region were provided, but as often happens at pro bono conferences, this led to a discussion about the various meanings of pro bono with views ranging from a definition of the delivery of all free legal services, to only those services provided to the poor, disadvantaged and marginalised by the private legal
profession. The concepts were soon clarified, particularly by the international experts, Esther Lardent, Nicolas Patrick and Ed Rekosh, each providing a unique global view of the pro bono movement and its many moving parts, with Nic Patrick suggesting that the path to increased pro bono growth in China may be under the umbrella of corporate social responsibility citing Article 5 of the Chinese company law that states ‘in the course of doing business, a company must…conform to social morality and business ethics, act in good faith…and undertake social responsibility’.

The workshops on the second day of the conference were held at the ‘high rise’ University of Economics and Law (UEL) situated in the fields about 40 km outside of Ho Chi Minh City. These included issues of how to develop support from government and the legal profession for pro bono, working with clearing houses, how to develop a pro bono-minded legal profession and how to manage working partnerships.

The clearing house workshop brought an Australian perspective through Sue Garlick from QPILCH talking about their Legal Health Checklist and the Homeless Persons Legal Service, a South African perspective from Erica Emdon, the Director of 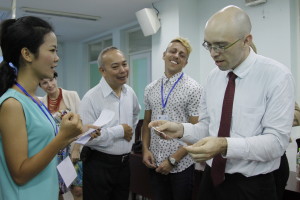 Probono.Org who discussed the challenges faced in a country that has mandated that its lawyers undertake  24 hours pro bono work per lawyer per year, a global perspective from Ed Rekosh, Executive Director of PILnet, who discussed PILnet’s development and the operation of their clearing house in China, and Serena Grant, Senior Manager – Legal at the Thomson Reuters Foundation informing people about the international TrustLaw Connect pro bono clearing house and the opportunities it presents.Singapore was again identified as a leader in pro bono development in the region but it was fascinating to hear from the Indian speakers, including Nisha Saxena from the Supreme Court of India about the constitutional and legislative underpinnings for ‘legal aid’ services in India and the leadership being shown by the court and government. The Hong Kong delegates seem to think that the time is right for creation of a clearing house or similar in their city. 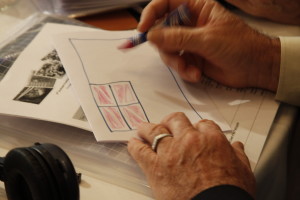 Members of the Vietnam Bar and the Director of Vietnam’s National Legal Aid Agency participated in the conference and were keen to further develop the pro bono ethic amongst their lawyers.

Even though it is early on in the development of a pro bono legal culture for a number of the countries involved, the conference showed that the pro bono movement is alive and well in the South/South East Asian region of the world.

As the conference drew to a close against the backdrop of a bust of Ho Chi Minh framed by a dark green curtain with the red star and hammer and sickle high above, a banner reading “Viva Pro Bono” was passed from the Director of UEL to Tanguy Lim, Director of Pro Bono Services, Singapore Law Society passing to Singapore the responsibility to host the 3rd South East Asia/Asia pro bono conference to be held in Singapore from 9-11 October 2013.