As the months ticked down, the BABSEACLE staff and volunteers were hard at work preparing for the highly-anticipated 4th Asia Pro Bono Conference & Legal Ethics Forum. The event took place in Mandalay, Myanmar from the 3rd to the 6th of September, 2015. The conference and forum hosted 230 delegates from 19 countries from across the legal community including lawyers, legal educators, students, judges, government officials, and civil society professionals. The theme of the conference and forum was “Pro bono and ethics build a noble legal profession.” It was an inspiring exhibition of a strong commitment to pro bono, legal ethics and justice education in the region and internationally. 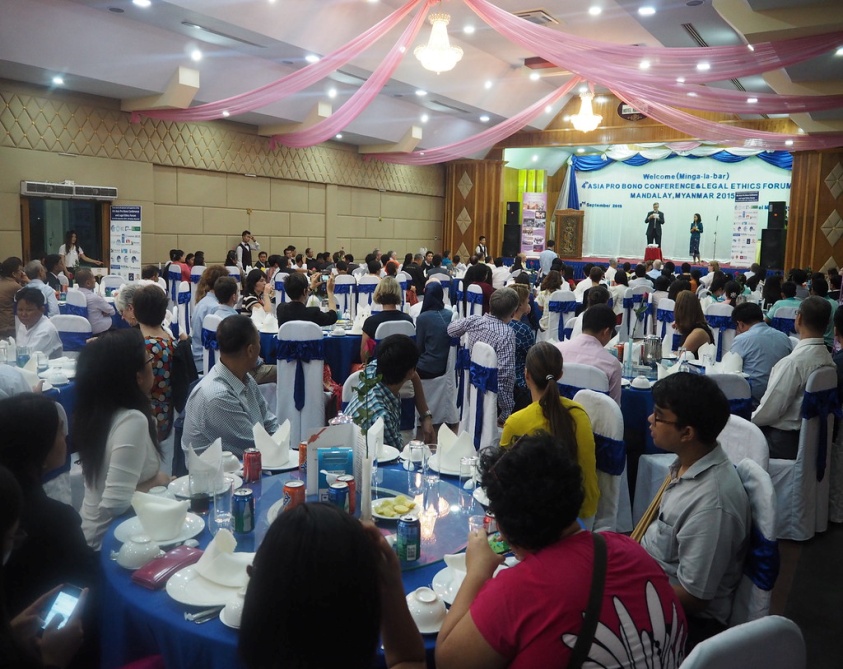 The conference was co-organized by Bridges Across Borders Southeast Asia Community Legal Education Initiative (BABSEACLE) and an international consortium comprised of law firms, law societies, legal education institutions, access to justice-related organizations, and others. Delegates from around the world attended to continue the momentum of the pro bono and legal ethics movements, to propel them forward, and to recognize the successes and connections established by the previous three conferences. The first conference was held in Vientiane, Laos in 2012, the second in Ho Chi Minh City, Vietnam in 2013, and the third in Singapore last year. This year’s conference took place at the Wilson Hotel for the duration of the event.

A new addition to this year’s pro bono conference was a silent auction. Delegates and donated items from numerous countries from around the globe to be bid on. All the proceeds went to the victims of the recent devastating Myanmar flood. The silent auction turned out to be a huge success as it raised over two million kyat or over $1,500 USD. The funds were donated to the Free Funeral Services Society and the Sidagu Association to provide direct aid to the flood victims.

The conference and forum were kicked off by Bruce Lasky, a Co-Founder and Co-Director of BABSEACLE, who utilized an inspirational quote from an iconic African American tennis player, Arthur Ashe, “start where you are, use what you have, do what you can,” to summarize what pro bono was all about and what principles it was founded on. He had the participants repeat back the quote and, with this simple act of solidarity, the tone was set for the entire conference and forum.

Following the morning and a partial afternoon of plenary sessions, Day 1 culminated in the late afternoon with six breakout sessions, allowing delegates to congregate in smaller, more intimate settings while having the freedom to choose what topics best suited their interests and needs. Topics ranged from “Overcoming challenges of replicating pro bono programme success,” to “Small firm pro bono,” “Showcasing successful pro bono partnerships in the region,” and “Pro bono, corporate social responsibility: Differences and synergies.”

Day 2 began with opening remarks by the Immediate Past President of LAWASIA and advocate from Joyce A Tan and Partners, Malathi Das. She coordinated her address by referring to the “pro bono tree” of structure, culture, and nurture. In an elegant metaphor she described how the trunk of the tree was its structure providing the logistics and the practical aspects of pro bono. Values and culture were the roots of the tree, keeping it strong and firmly in place. Finally, she predicted that if we nurture the tree by working hard and staying ethically disciplined, we would reap the delicious fruit of justice. Two more blocks of breakout sessions brought the day to a close before a celebratory dinner at the Kot Ko Island Restaurant.

Not only was the dinner outside and surrounded by palm trees and brisk blue waters, but the venue included a chance for delegates to present a cultural display of singing, dancing or both from their respective countries. Myanmar, being the host country, kicked off the cultural performances which turned out to be much, much more. A melting pot of culture ensued as delegates crossed cultural boundaries and joined in with other countries and vice versa. A symbolic washing away of barriers and a demonstration of how the power of pro bono, ethics, and service can bring communities together closed the night.

As the conference reached the half-way point, the focus shifted toward students, youth, and the next generation of ethically guided pro bono champions. Students were given the chance to present what they had done and learned while studying and doing pro bono. The day started with the stage adorned with students and that would be the theme for the duration of the day.

The dinner for Day 3 was hosted by the Southeast Asia Legal Aid Network (SEALAW).The dinner took place at the breathtaking Jin Taw Chinese Buddhist Temple. Before dinner, following the tradition first began in Laos, the conference flag was ceremoniously passed from the Myanmar to the Indonesian delegation. U Hla Kohanded the “Viva Pro Bono” flag to Geneveiva Yastinito signify that the next conference would take place in Indonesia. Then, delegates who had contributed to the conference were asked to come on stage by country. As the list of countries became exhausted, almost the entire delegation was now represented on stage. In a jubilant demonstration, the delegates received recognition for their past achievements, joined in celebration of their current collaboration, and anticipated their future success, together.

The last day of the event was the legal ethics forum, which opened with a lesson about strengthening ethical judgments. Plenary 4 focused directly on the main theme of the conference as it posited the question of how to develop a noble legal profession through pro bono. Famous lawyers that many people admired, like Nelson Mandela, were dissected in terms of what made them good and ethical lawyers. The audience was challenged to take on the same characteristics as these iconic figures. Two separate blocks of breakout sessions proceeded.

The 4th Asia Pro Bono Conference & Legal Ethics Forum was a monumental leap forward and will have a positive effect on the future success of pro bono, legal ethics and justice education in the region and worldwide. John Corker, the Director of the Australian Pro Bono Centre, summed up the conference well when he stated, “This conference has evolved from year to year and country to country, to bring together a unique mix of international and local issues. The conference has the legacy of leaving behind a strengthened local legal profession and pro bono culture. This year was no exception.” See you next time in Indonesia for another inspiring event and, in the meantime, keep calm and do pro bono.