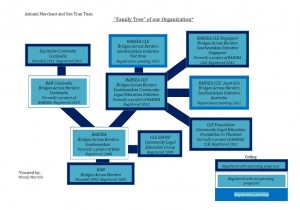 Structure and Development of Organizations Deriving from
Bridges Across Borders (BAB)

That is done by:

Equitable Cambodia has operating programs in the country as for now.

Type: International, non-governmental legal education, access to justice organization, registered in the US

Milestones of BABSEACLE and Organizations Related to it