The 2nd Southeast Asia/Asia Pro Bono Conference was held in Ho Chi Minh City, Vietnam on the 11th and 12th of October 2013, bringing together over 200 delegates from 19 counties. The conference celebrated and emphasised pro bono legal work, discussing ways to further the outreach of the pro bono ethos in Southeast Asia and around the globe.

Co-organised by Bridges Across Borders Southeast Asia Community Legal Education Initiative (BABSEACLE) and The University of Economics and Law (UEL), the conference was attended by passionate Pro Bono practitioners. Participants extolled the virtues of pro bono work and looked to the future of pro bono lawyering. The conference and delegates were supported by the enthusiastic participation of law students from Cambodia, Singapore and Vietnam.

The two-day conference saw speeches, panel discussions, question and answer sessions and interactive workshops led by experienced international lawyers. The speeches spoke of the challenges and successes of pro bono work in the lawyers’ respective countries.

Simultaneous translation was provided throughout to accommodate for the many different languages represented in the conference room. This internationalism was displayed during the conference’s opening with all delegates being asked to draw their national flag and say hello in their native language, creating a relaxed and welcoming atmosphere that permeated throughout the conference. This vibrant and dynamic attitude was exemplified as high-level lawyers worked and discussed issues raised with their counterparts from other countries, law students and legal NGO workers. 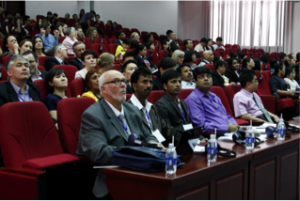 As the title of the conference was ‘Pro bono initiatives to strengthen access to justice’, there ensued various fruitful discussions on the definition of pro bono and the best practices for obtaining access to justice in different countries. The participants were regaled with examples of pro bono work in action from the various countries represented on the panels of speakers. Esther Lardent, a lawyer from the United States, provided examples of what pro bono means from her experience.  Ms. Lardent spoke of the difference between pro bono and the American government controlled ‘Legal Aid’, meaning “services provided to low-income or disenfranchised groups”. Hence Ms. Lardent gave her definition of Pro bono as, “lawyers in private practice who are doing such work for free as part of their professional obligations to the legal community”. John Corker also provided various example of the pro bono movement in Australia. Mr. Corker relayed that in Australia, “at a federal level, to do work for the government a firm must commit to doing 35 hours pro bono work per lawyer per year”. Thus a different definition of pro bono arose; as a movement integrated with governmental practices. Through various presentations, participants were able to compare and contrast the meaning and practice of pro bono globally. The overarching theme being that the growth of pro bono depends on what Corker called the “visibility” of pro bono.

The speeches and panels were met with enthusiasm, evident in the rigorous Q&A sessions after each. The interest extended outside the conference room; with participants networking and exchanging their ideas on how to further develop pro bono legal culture in the region. The participants were indulged with discussions from pro bono resource persons, each possessing a unique field of expertise andexperience, working in different countries including the US, Myanmar, Singapore and Australia to name a few.

This conference proved that while pro bono culture is still in its infancy in many South East Asian countries, it is nevertheless alive and gaining strength.

The conference was bought to a close by the presentation of a banner reading ‘Viva Pro Bono’ to Tanguy Lim, the director of pro bono services at the Singapore Law Society. Singapore will host next year’s 3rd SEA Asia Pro Bono Conference in October 2014.