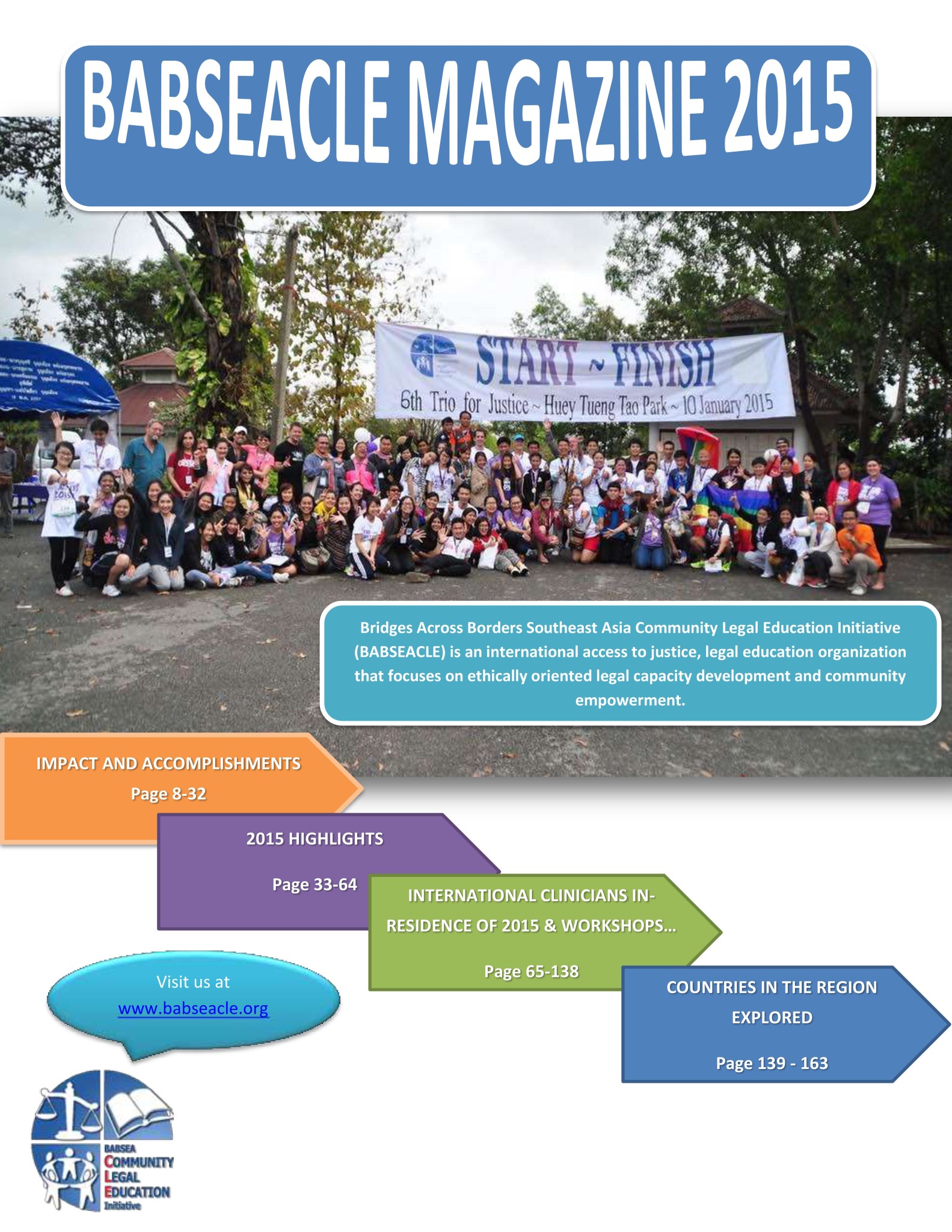 2015: The Year of Synergy, Collaboration and

With 2015 having come to an incredibly successful close, and the start of 2016 now upon us, I was asked by our amazing team members to write to each of you an opening article/letter for our Annual End of the Year Magazine. Initially I did not know where to even begin as so many positive things happened in 2015. It still feels like a whirlwind. Yet, after some long reflection I accepted this requested honor and tried to identify some of the core essences that would more adequately illustrate our BABSEACLE 2015 year. As I wrote above, at first this required much thought and reflection, but then it all became so simple.

The realization of this simplicity came to me as I reflected on a quote by Arthur Ashe. This was a quote that I recited while standing in front of a packed room of access to justice champions at the 4th Asia Pro Bono Conference and Legal Ethics Forum held in Mandalay in September 2015.

For those of you unfamiliar with who Arthur Ashe was, he was the first black tennis player selected to the United States Davis Cup team and the only black male ever to win the singles titles at Wimbledon, the U.S. Open and the Australia Open. Having grown up in a segregated neighborhood in Richmond, Virginia, it was not surprising that daily and life-long challenges were common place to him. Yet this man, who was awarded the Presidential Medal of Freedom by Bill Clinton, went through life achieving milestones others dream about. He did so following a simple philosophy of, “Start where you are. Use what you have. Do what you can.”

The use of this quote in September in Mandalay seemed very appropriate at the time and since. In Mandalay, during the opening of the event, I was facing hundreds of persons from throughout Asia and the world who were engaged in the justice sector and committed to working alongside the vulnerable and marginalized to achieve greater access to justice. Many of them were doing this with few or almost no resources. They were inspirations to all present and they were shining examples of how synergy and true collaboration could achieve unbelievable things.

It was these reflective thoughts of me standing in front of so many in Mandalay that I had going through my head that had me also reflect on our own BABSEACLE team and supporters like you. I reflected on where we at BABSEACLE started from, what resourced we collectively used to move global justice education and access to justice forward, and what we have done and continue to do together.

Some things were easy to remember and yet many things I had forgotten. Therefore, I went back and re-read the first Annual Magazine which we sent out back in 2006, three years after our organization was formed. I then read each of our Annual Magazines, slowly and methodically. I compared what we were doing then, and in successive years, and where we are now. Throughout I thought about so many of the successes and challenges and those who have walked alongside us. In doing this I thought deeply about what got us here and what provided us the fuel for us to keep moving forward, to grow, and to expand both wider and deeper.

The information I sifted through was immense and doing so was difficult. Yet, the answer to all this was simple. Synergy and collaboration has been the real key to making it work and 2015 was a model year exemplifying this ideology. Synergy and collaboration has been the answer both within our team, and more broadly with our partners and supporters.

In looking at where we started and the remarkable impact we have achieved since, it was clear from the beginning that we understood that when working collaboratively and applying synergy the whole outcome is much greater than the sum of the parts.  This strategy is based upon the wholehearted belief that through such synergy one plus one does not equal two. Rather, when working together and applying synergy, one plus one can equal three, or five or one hundred or maybe even ten thousand.

Yet, while the answer was simple, it was not always as simple to convince others that synergy and collaborations are the key to real access to justice success. Through my reflections I remember specifically being told by some others in the “development” sector that we at BABSEACLE were being naïve and that there was only a limited amount of “pie” to go around to eat. Therefore, collaborations and working  in synergy was great in theory but not in practice because we all were often fighting to get the limited pieces of pie. Our answer to this was also simple.  We said, and continue to say, that if we work together as a team we simply bake more pies together and ensure that many more people have pie.

In 2015 this is what we did, we baked more pies with many others and many more people were able to satisfyingly eat pie.

What you will read throughout the pages of our 2015 Magazine are examples of our wonderful BABSEACLE team baking pies with each other and our partners, and so many people eating pie together. The baking of these pies began early in January 2015 at the Access to Justice Weekend and 6th Trio for Justice event and kept happening all year through the last days of December.

Some of these examples included helping to organize and move forward the South East Asia Clinical Legal Education Association (SEACLEA), working with Justice Without Borders (JWB) and the Open Society Justice Initiative to develop a legal manual to support migrant workers from throughout the Asia region, organizing and hosting the Inaugural Asia Clinical Legal Education Summer School, assisting on the organizing committee to successfully arrange the 8th Global Alliance for Justice Education and 13th International Journal on Clinical Legal Education Worldwide Conference and Workshop, co-organizing with a broad based consortium the 4th Asia Pro Bono Conference and Legal Ethics Forum, working alongside our wonderful partners UNDP, IDLO and ASF to devise and complete a pilot project to initiate Rule of Law Centers throughout Myanmar, and of course working with so many of our university and other partners throughout Asia and globally to develop and strengthen justice education programmes. The pies may not always have looked perfect but we started baking them together, used what ingredients we had, and in the end we baked amazingly delicious pies and did amazing things with them.

As you go through the following pages we hope you enjoy what you read, and we encourage all of you in 2016 and onward to come and bake and eat pies alongside us.

Thank you again for being there,